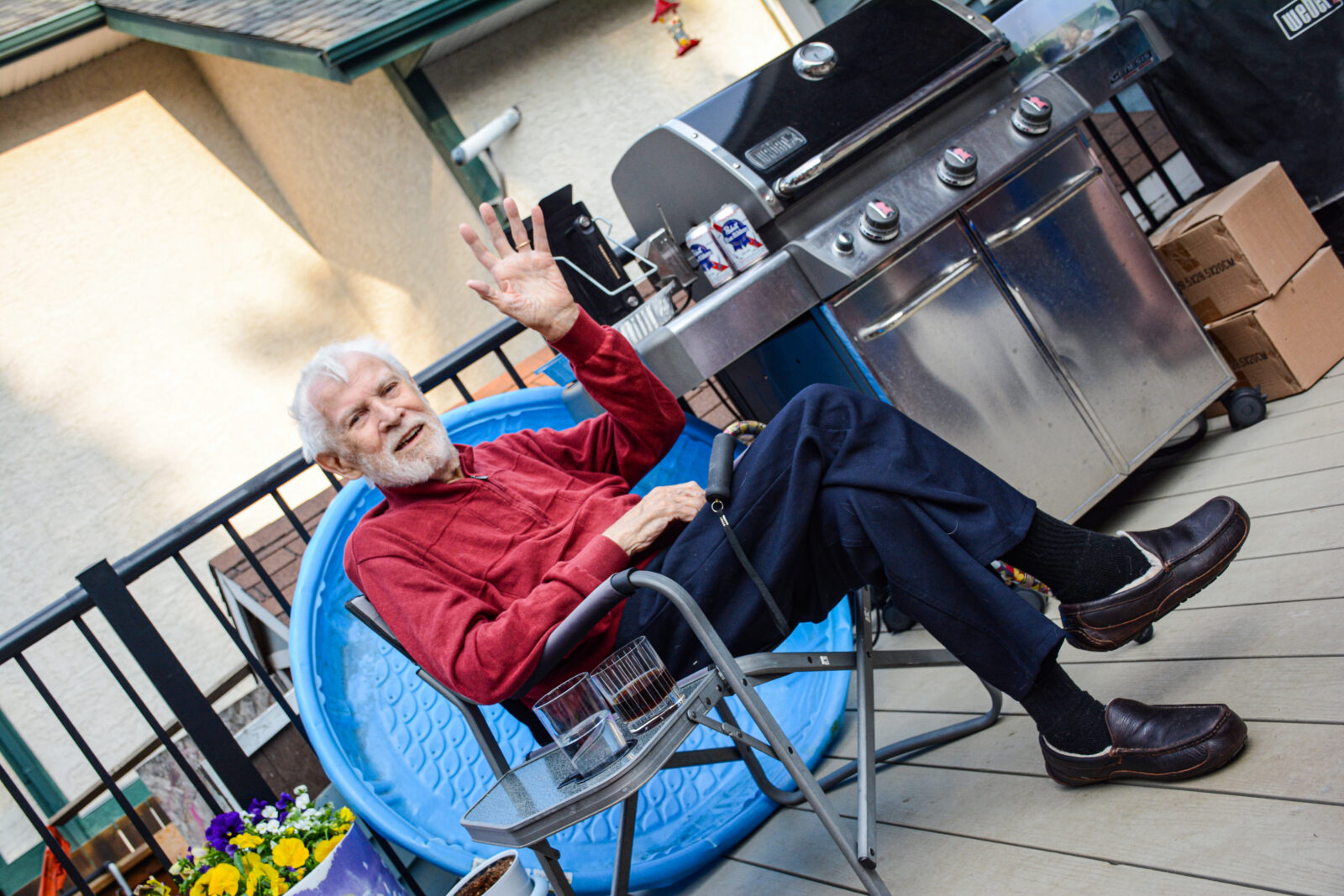 It’s impossible to put into words how special this top-tier family member was to all of us, and so many other people who met him, for the Jedi-like mentor that he was.

With his straight, yet quirky personality, he sprinkled his wisdom and
character in a multitude of ways throughout his life in everything that he did.

He brightened so many people’s lives with his ethereal light, and I can speak for anyone who knew him that we are all blessed to have been in the presence of such an enchanting human being.

Seeing and listening to him beam about his eclectic endeavours as he looked back on a life lived to the fullest will remain one of my greatest memories.

He was a stellar storyteller, and having lived a vibrant life, his stories kept you enthralled, and often in stitches.

He would speak fondly of his upbringing on a farm in Albany, Prince Edward Island, where he was born into a family of 13 unique Greens.

Since he was a child, he described having made lasting friendships with unlikely people, ranging from young-to-old, and sometimes those who came from down and out places, but his judgement-free temperament saw further than age or social stature.

After hearing him describe his mother, Laura Green, as someone who, “didn’t know a stranger,” this natural acceptance seemed to not fall far from the tree.

Nearly born into the sport, those close to him know that Gramps’ favourite pastime was watching, visiting, betting, and participating in horse races.
He said that he visited his first track at the age of 5.

If you’ve ever seen a horse race program, or “race book,” you’ll understand that it’s a complicated jumble of numbers and words, alongside peculiar horse names. He said his favourite horse that he ever bet was named, “Doctor Pat.”

He always told me, “some people do crosswords, I do race programs,” to keep his mind “sharp”. And, sharp he was, right up until the end.

He would share stories from the the Navy of “up-spirits” (rum – dark rum), and seasick sailors. He told me that the dismayed look on his face in the photo for his Royal Canadian Navy identification document was due to the fact that he had lost his ID the night before, and had to get a new photo taken to replace it. With the terrible hangover he had, it made for a mean mug.
I don’t feel so bad for losing my own ID (several times) once he told me that.

Circa 1953, after a bout of hitch hiking on the East Coast, he decided to take a job driving trucks, which would bring him out west. One of his colleagues was a man named Jack Hilts, who offered Gramps a place to say in Calgary. Hilts said that his sister, Doreen, would come pick them up. Serendipitously, that woman would become my grandmother.

It was around 1972, at the age of 40, when he went back to school as a
mature student, attending Mount Royal University in Calgary for social work. He ended up in a practicum at a halfway house called, Scarborough House, and went on to become a parole supervisor.

When he spoke of his time working with cons and criminals, he recalled nearly every one of their names and stories who he ever mentored, from petty thieves, to convicted
killers (or “lifers,” as he would say).

He remembered the day that his colleague, Pat Graham told him about a self-help group that he was trying to get going in Drumheller. Graham asked if Gramps would like to come to a meeting – so he did. The next day the group wrote him a letter thanking him for attending the meeting, and how they were impressed by his contributions.
This encouraged him to continue going, and he travelled from Calgary to Drumheller every Sunday night for a couple years.

That group would become the 7th Step Society of Canada, a program that continues
to help offenders and ex-offenders adapt their outlooks and behaviors by using a
7-step self-help philosophy.

In October 2021, he was celebrated by his friends and old colleagues from the 7th Step Society of Canada / the Alberta 7th Step Society for his instrumental aid in the beginning stages of their program, where he assisted to coach cons in the art of helping themselves and other people, doing well in society, and maintaining their own freedoms.

In his wallet, he kept a card from October 26, 1976, that was presented to him by the 7th Step Society, “Honourary Con of the Year.” At that time, said he was the only non-con, or from his reference, a “Square John.”

Grandpa had a true affinity to help and care for all living things.

In his spare time, he was as a hockey coach, teaching children to skate and play the game. He was a devout Calgary Flames fan. He loved to skate at Bowness Park in Calgary; something he did every winter until he physically couldn’t anymore.

Through his love for “the races,” Gramps was often surrounded by horses, but he loved all animals, and especially showed a fondness for birds.

One day (while at the racetrack), Gramps noticed a wounded pigeon. He brought the bird home to nurse it to health. He kept that bird for about 18 years. His name was “Bert.”
I remember when he would let Bert fly around outside the house in Bowness, and Bert would always return back home to the man that saved him.

A day in the life of Gramps would maintain a prominence of feeding the birds (at a restaurant, he’d typically take half his meal to-go, and would always tell the waitress that he had to, “feed the birds”). He even bought cat food to give the neighbourhood cats a treat as they prowled the streets of Bowness.

Although, he claimed to be “tone-deaf”, Gramps had a specific taste in music.
He loved Ian Tyson, but he really loved Janis Joplin. He told me that he recalled making trips up to the Icefields while helping my Dad, Marc Green, and the Mikes Electric team. He said he would play her tapes as he drove through the scenic Rocky Mountains with her raspy voice keeping him company.

Aside from his epic stories – all of which, I haven’t even scratched the surface of in this ode – regarding what he did, I would say that his true life’s work was who he was; an outstanding husband; a caring father/father-in-law; an exceptional grandfather/great-grandfather; a cherished uncle; and, a valued friend to so many.

Although I feel pain in this loss as such a special character fades away and ends a very significant chapter in my life, I also feel immense gratitude and comfort while reflecting on the man that he was, and I know he will continue to guide me well..

He was a true wizard of a man; simply, magic himself.

Now, he has joined my Grandma Green at the racetrack in the sky.

Time is so precious as it goes by, but these memories will last a lifetime.

To my Gramps, the Gambler, and so much more; I love you forever.

In Loving Memory of Ralph Green

Please click here for obituary information and to pay homage by sharing a memory.